My Lyrics - Eugen Cicero in Tokyo 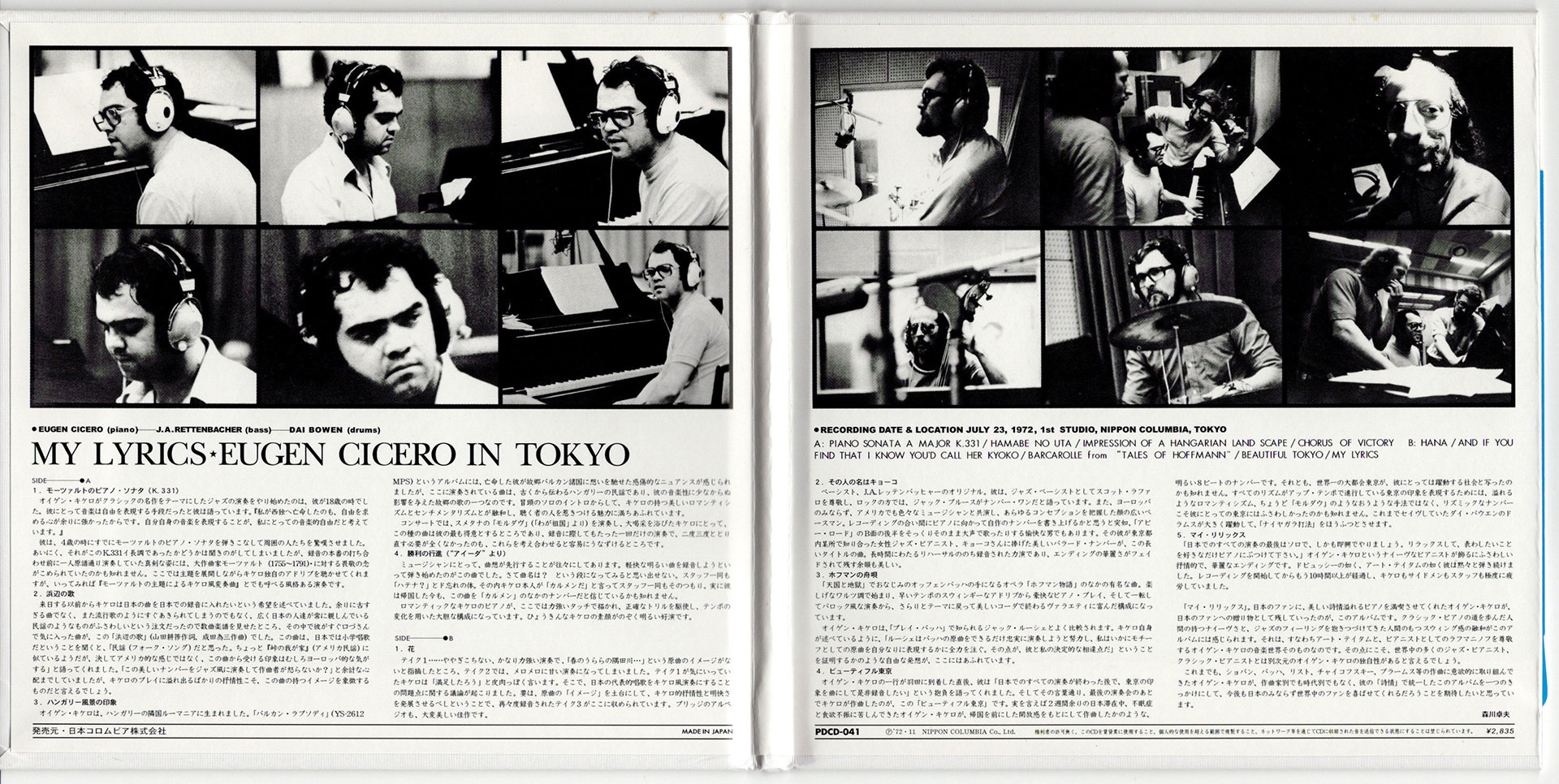 Eugen Cicero started playing jazz music based on classical masterpieces when he was 18 years old. He says that for him music was a way to express his freedom. “I defected to West Germany because my desire for freedom was too strong. I consider expressing my own music to be my musical freedom.”At the age of four, he had already wowed everyone with his ability to play Mozart's piano sonatas. Unfortunately, I didn't get a chance to ask him if it was the K331 in A major, but the earnestness with which he played it alone according to the original score before the meeting for the recording may have been a sign of his deep respect for the great composer. In this piece, we can hear Cicero's own improvisation while developing the theme, and it can be called "Cicero Variations on a Theme of Mozart".

HAMABE NO UTA (song on the beach)

Even before coming to Japan, Cicero had expressed his wish to include Japanese songs in his recordings in Japan, not too old songs or popular songs that would be quickly forgotten, but folk songs that Japanese people have always been familiar with. This song is known in Japan as a small song. When he was told that this song was an elementary school “shoka” in Japan, he replied, "I thought it was a folk song. It sounds a little like 'Home on the Range' (an American folk song), but it's not American at all. I wondered if the composer would be offended if I played this beautiful number in a jazz style.” Cicero's playing is so full of emotion that it symbolizes the image of this piece.

IMPRESSION OF A HUNGARIAN LANDSCAPE

Eugen Cicero was born in Romania, a neighbor of Hungary. In the MPS-album "Balkan Rhapsody", there is a sentimental nuance in the exiled composer's thoughts about his homeland in the Balkans, but the piece performed here is an old Hungarian folk song, one of the songs from his homeland that had a great influence on his musicality.

From the very beginning of the solo introduction, Cicero's beautiful romanticism and sentimentalism blend together to create an irresistible attraction for the listener.

It is easy to understand why Cicero, who performed Smetana's "Moldau" (from "My Fatherland") to great acclaim at the concert, is at his best in this kind of music, and why he did not need to replay the piece at the recording session; it was recorded in only one take.

For musicians, the idea of a song often comes first. “I started playing this song when I decided to record a light and cheerful song. What was the name of the song? I couldn't remember.” The whole staff seemed to have forgotten it. Eventually, Cicero himself said, "It's Carmen" and the whole staff thought so too. In fact, even now that he has returned to Japan, he may still believe that this song is a number in Carmen.

The romantic Cicero's piano is portrayed here with a strong touch, precise trills, and a bold structure with tempo changes. This is a bright and cheerful performance that shows the true face of the jovial Cicero.

Take 1 was a rather awkward and rather caustic performance, and when I pointed out that it didn't have the image of the original song "Sumida River in the Springtime", Take 2 turned out to be a melodically sweet performance. Cicero, who liked take 1, said sarcastically, "You must be satisfied”. This led to a debate about the problems of making a Cicero-style performance of a typical Japanese “shoka”. In short, it was decided that the "image" of the original should be used as a foundation to develop the Cicero-like sentimentality and clarity, and the re-recorded take 3 is included here. The arpeggio in the bridge is also very beautiful.

AND IF YOU FIND THAT I KNOW YOU'D CALL HER KYOKO

An original by bassist J. A. Rettenbacher. He respects Scott LaFaro as a jazz bassist, and says that Jack Bruce is the number one rock bassist. He has played with various musicians not only in Europe but also in the U.S., and is a broad-faced baseman who knows all the conceptions. In between recording sessions, he writes his own songs at the piano and suddenly sings the second half of the B-side of "Abbey Road" at the top of his lungs. This long-titled song is a beautiful ballad number dedicated to Kyoko, a female jazz pianist he met at a certain place in Tokyo. It was recorded after a long rehearsal, and it has a beautiful faded aftertaste with a gorgeous ending.

BARCAROLE from "TALES OF HOFFMANN"

This is a famous song from the opera "The Tales of Hoffmann" by Offenbach, who is known for "Heaven and Hell". It begins with a joyful waltz-like tune, then swings into improvisations, a rather dynamic piano bray, and then a baroque performance, which quickly returns to the theme and ends with a beautiful coda.

Eugen Cicero is often compared to Jacques Loussier, known for his "Play Bach". As Cicero himself states, "Loussier strives to play Bach's original music as faithfully as possible, while I put all my effort into how to express the original music as a motif in my own way. That is the decisive difference between him and me," and there is an abundance of free thinking here that seems to prove this point.

Immediately after Eugen Cicero's group arrived at Haneda, he told me that he wanted to record a song about his impressions of Tokyo after all his performances in Japan. True to his word, Cicero composed "Beautiful Tokyo" after his last concert. To tell the truth, Eugen Cicero, who had been suffering from insomnia and loss of appetite during his two-week stay in Japan, seemed to have composed this bright 8-beat number based on his sense of freedom before returning home. Or perhaps he saw Tokyo, the world's largest city, as a vibrant society. To express his impression of Tokyo, where all rhythms are up-tempo, perhaps a rhythmic number would have been more appropriate for Tokyo, rather than the overflowing romanticism of "The Moldau”. Dai Bowen's drums, which had been saving the song until now, made a big leap, reminding us of the "Niagara Method".

"I'm going to end all my performances in Japan with a solo, and I'm going to improvise. Relax and let the piano do what it wants to do." It's an emotional and brilliant ending for a naive pianist like Eugen Cicero. Like Debussy, like Art Tatum, he continued to play in silence. More than ten hours had passed since the start of recording, and Cicero, the sidemen, and the staff were all extremely tired.

"My Lyrics". Eugen Cicero left this album as a gift to his Japanese fans, who had enjoyed his beautiful and poetic piano playing. In this album, you can feel the harmony between the naivety of someone who has walked the path of classical piano and the swing of someone who has always embraced the feeling of jazz. This is the musical world of Art Tatum and Eugen Cicero, who respects Rachmaninoff as a pianist. This is what sets Eugen Cicero apart from many other jazz violinists and classical pianists in the world.

Written by the recording director Takuo Morikawa. He was born in Kyoto, Japan in 1946. Graduated from Doshisha University, Faculty of Economics. After working for Nippon Columbia and Warner Music Japan, he is now the president of MMLab. Consultant for music business. His thesis is "Communicating Popular Music through Education".